'If Beale Street Could Talk' talk-back

One of our highlights and most talked about event, from last month was an exclusive screening of the film If Beale Street Could Talk based on the novel by literary great James Baldwin. After the screening, we hosted an intimate discussion with Baldwin’s niece Aisha Karefa-Smart and Nataleah Hunter-Young. 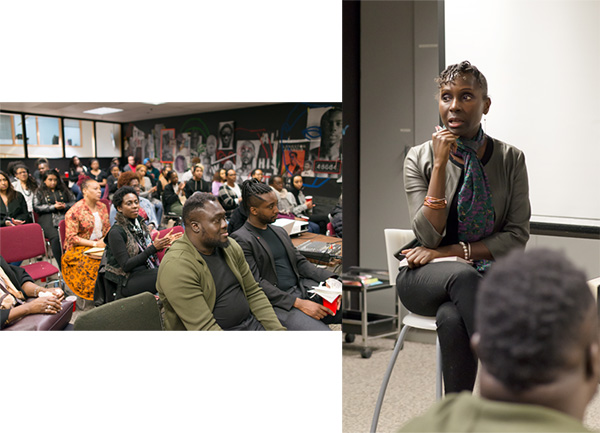 Aisha’s childhood home in New York City was a congregation for African American writers, artists and musicians. Her uncle, James Baldwin, often hosted all night “jam sessions” with literary greats such as Amiri Baraka, Maya Angelou and Toni Morrison. Aisha is a published author, educator and she facilitates discussions examining the work of her uncle and his reemergence into mainstream political and racial discourse.

“He’s like a train that’s coming through,” she said, “people are trying to get on the train and get some of that teaching and love because his work is all about the redeeming power of love. I think people respond to that because we need that so much in this time.”

If Beale Street Could Talk

If Beale Street Could Talk is a Black love story that is as relatable now as it was in 1974 when the book was published. In his fifth novel, Baldwin crafted a story about a Black family struggling to hold on to each other, and welcome new life, in the midst of injustice. In the film, actors Kiki Layne, Colman Domingo, Regina King and Scarborough native Stephan James bring to life Baldwin’s characters which Aisha says are based on her own family members.

“I know that Tish’s mom Sharon was deeply influenced by my grandmother and my grandmother’s ability to love unconditionally, to not judge and to accept family members in whatever circumstance you found yourself in. She was not going to reject you,” said Aisha, who finds the film emotionally overwhelming.  “I’m watching this family and I see my family,” she said.

Aisha also described the film as unexpected because of her uncle’s strong critics of Hollywood and its depictions of Black people, which he wrote about in a book called The Devil Finds Work published in 1976.

“We’re usually accessories in a film…we’re not fully developed characters, who have an interior life, who are going through things,” she said.

So when Barry Jenkins wrote the Baldwin Estate almost a decade ago and sent a copy of his first feature-length film Medicine for Melancholy, Aisha and her mother were impressed because Jenkins’ characters were evolved, the dialogue was clever and the film has several poignant observations on race and class. Medicine for Melancholy is also a Black love story.

“A lot of people think it was Moonlight and the fact that he had won an Oscar for Best Picture that convinced the estate but it was [Jenkins] first film – it’s an incredible film,” she said.

Jenkins’ trademark style of capturing the richness of Black skin on film and his technique of zeroing in on a character’s face to show the gamut of expressions and emotions they are feeling suited Baldwin’s words perfectly.

“There’s a million and one ways to tell a story, it’s not just the formulaic thing that Hollywood has pushed out. It’s time for something new and I think [Jenkins] is one of those filmmakers that’s pushing that,” Aisha said.

Referring to Jenkins as a master, Aisha remarked on his ability to tell a story without a lot of dialogue and at only 197 pages, If Beale Street Could Talk does not have a lot of text. While the majority of the film is steadfast true to the novel one creative liberty Jenkins took was with the ending. Aisha believes the novel’s actual ending was not filmed because it would have been too devastating.

“When I was at the premiere in New York, I said that to love while Black in this culture, in this Matrix that we’re in, is a revolutionary act and it’s an act of resistance.”

Nia Centre would like to extend a special thank you to Aisha Karefa-Smart for visiting the Centre.

Do you know your Intellectual Property Rights?