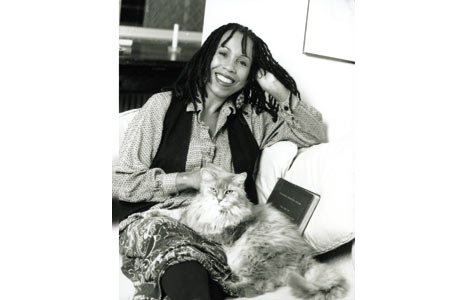 “The arts were important to Ayanna. Her attitude about almost anything was, `Why not? Let’s try it.’’” – Gay Allison

Ayanna Black was a poet, writer and influential leader in Toronto arts from the early 80s until she passed away in 2009. The Toronto Star called her the “engine for Black writing” who played an integral role in the elevation of many legendary Black Toronto writers like Austin Clarke.

One of her many accomplishments was co-founding the Canadian Artists Network: Black Arts in Action, an organization credited with launching the careers of many contemporary Black artists.

She co-founded Tiger Lily, the first Canadian magazine devoted to women of colour writers, and helped bring Bishop Tutu to Toronto, a visit that marked a pivotal point in Canada’s stand against apartheid.

As a catalyst for community organizing in the arts, she was instrumental in organizing a visit by Rosa Parks for an exhibition at the Royal Ontario Museum.

Ayanna was an active committee and board member for the Harbourfront Centre, and was influential in activating the centre with Black artistic traditions. With all of her trademarks in the community, she was also a successful poet, and published two books: No Contingencies (1986) and Linked Alive (1995).

I suppose [Ayanna] realized that she had this talent to bring people and cultures together.

Outside of the arts, Ayanna supported the health of communities in Toronto as a psychiatric nurse for over 40 years. According to her good friend, Gay Allison, the plight of women patients sparked her lifelong interest in feminism.

For #BlackHistoryMonth, we’re remembering the artists whose every day actions, expression and efforts to build community helped push our culture forward. We remember Ayanna’s tenacity, dedication, compassion and resolve that built a foundation for Black artistic expression within Toronto institutions.

She called for more representation and respect of Black cultural traditions. Her work inspired a generation of artists who weren’t seen in the mainstream, and propelled the careers of so many legendary artists in Toronto.