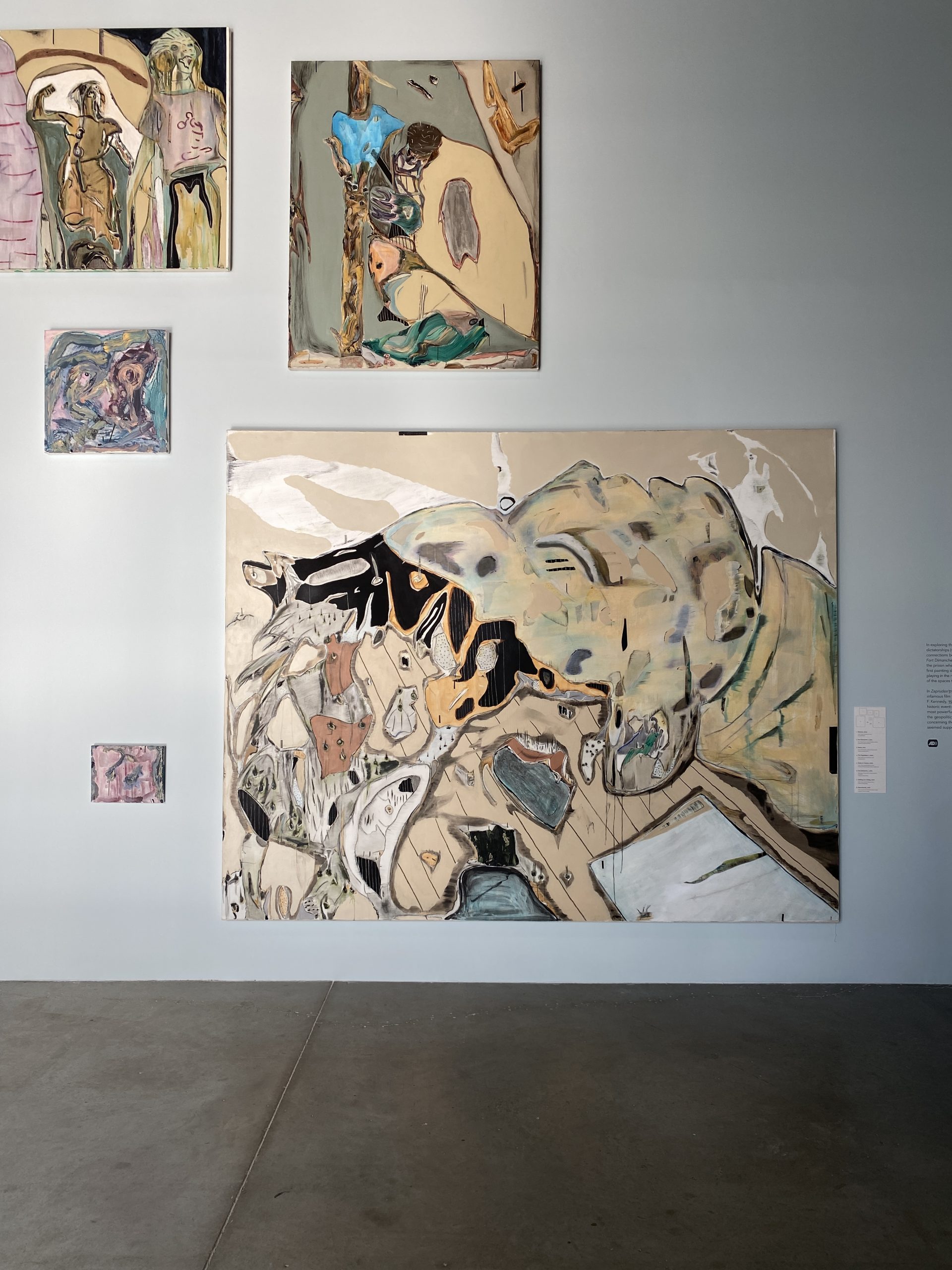 Nia Centre will be co-presenting the next Sunday Scene by The Power Plant Gallery featuring Emilie Croning on Manuel Mathieu’s exhibition: World Discovered Under Other Skies. This weekly year-round event allows speakers from the world of art and beyond to respond to current exhibitions, and draw provocative connections between their programs and broader cultural and intellectual debates. Ahead of the event, we want to give our readers a sneak peek of Manuel’s work and how Emilie will be approaching the discussion. Be sure to check out the full Sunday Scene on The Power Plant Gallery’s Instagram Live on Nov. 29 at 2 pm.

About a week ago I was lucky enough to visit The Power Plant gallery’s current exhibition, World Discovered Under Other Skies, featuring works by Haitian-Canadian artist, Manuel Mathieu. The exhibition is the artist’s first solo showcase in Toronto and focuses on bodies of work that are heavily rooted and inspired by everyday scenes, in conversation with the complex history of Haiti. The exhibition presented a collection of (very) new and past work ranging in mediums. Until now, I have been used to seeing Mathieu’s paintings, however, this exhibition extends beyond canvas bound spaces; including drawings, and even ceramics, to my repertoire of the artist’s practice. Curator Amin Alsaden was kind enough to show me around and provide some insight on the conception and his overall vision for the exhibition.

Upon entering the space, Alsaden aptly compared the layout of the exhibition to that of a play with three acts. The overarching theme of Haiti and the complexities being explored by the artist oscillate within the gallery. The first room, as indicated by the curator, places an emphasis on experimentation, ranging from small to large-scale drawings and ceramics that Mathieu produced during his time in China. The second room acts as a portrait of the artist, with his views and relationships to the world around him in the foreground. Continuing past this space and into the last, are works that speak to the effects of the Duvalier dictatorships that subjugated the small country. These works, in particular, engulf the viewer as they take over most of the height and widths of the walls. The exhibition presents a beautiful combination of work by the artist, teetering between the personal and the political. Alsaden writes: “Mathieu’’s work is a reminder that commemorating the tragedies of the past does not fall solely on the shoulders of a nation’s local or diasporic communities. Instead, it is a part of our collective responsibility.”

As my mind wanders back to my experience viewing the works in person, I cannot help but fixate on the visually tantalizing qualities of Mathieu’s work. When thinking about imagery that bridges that gap between abstraction and figuration; the medium, formal elements, and techniques become particularly interesting to me. The focus shifts to the gestures, textures, and colour. Encompassing the stages of experimentation, and onto the large-scale canvases the artist is utilizing, I think about how much the body plays into the art-marking. When working with small surfaces, our bodies are prone to express more controlled movements. This manifests in smaller and shorter strokes, compared to grand and more liberate gestures that implicitly engage the physical body. Though both in Mathieu’s case, create colourfully dynamic, yet ambiguous compositions.

Alsaden emphasized an innate and intuitive approach throughout the curatorial process – following through with the initial connections he has made with the work. In the second room off of the exhibition’s entrance, hangs a piece called “Rivière Froide 3” – a gestural rendition of a bust occupying the entire canvas. To the curator’s surprise this was, in fact, one piece from a triptych, whose counterparts were brought in for the exhibition from Brussels and Washington D.C.  World Discoveries Under Other Skies is the first time all three canvases have been reunited and displayed together. Moments like these can only be achieved through an open line of communication and rapport with the artist(s) you are working with. It is a part of the process. As a fellow curator, this is something that is particularly important to me as well.

Alsaden expressed wanting to place an emphasis on the narratives and formal strength of Mathieu’s practice without diluting the visual imagery with comparisons to the Western art canon. Instead, highlighting connections with Haitian figures who have inspired some of the iconography present within Mathieu’s work. An art history of equal importance. Additionally, granting the exhibition with a level of accessibility and legibility to audiences, all while respecting and wanting to do the artist justice.

Upon leaving, not only were these key moments achieved, but I left more informed, inspired, and grounded. The motifs and formal connection among the mediums such as the shapes, lines and contours, as well as the overall organic nature of the compositions, encourage the viewer to be carefully embraced by the frenzy. It was as though I was being transported by a wave and guided by Mathieu through a loaded history, and his own explorations. A history that I, admittedly and unfortunately, do not know much about. As underlined by Alsaden (and if there is anything this year continues to teach us), there is a collective responsibility that demands that we think outside of what immediately surrounds us. We are all complicit to this history.

At the end of the month, I will be presenting a Sunday Scene at The Power Plant in partnership with Nia Centre, and I hope to do it as much justice; further diving into some of these concepts! The exhibition will be on view until January 3rd, 2021.

Emilie Croning is a Toronto based artist, scholar, and emerging curator. Her work explores notions of identity and representation through visual language, working at the intersec-tions of feminist theories, post-colo-nialism, and art history. In 2019, she was part of our Artist in Residence program, a yearly incubator for emerging Black artists to have access to space, resources, time and mentorship to explore and enhance their craft. Emilie received her MA in Art History with a Curatorial Studies in Visual Culture Diploma from York University. She is currently working with Wedge Curatorial Projects. Learn more about her here.

Manuel Mathieu is a Haiti-born, Montreal-based multidisciplinary artist known for his paintings, which investigate themes of historical violence, erasure, as well as Haitian visual cultures of physicality, nature, and religious symbolism. Marrying abstract and figurative techniques, his compositions carve out space for us to reflect on Haiti’s transformative history while inviting us to consider the different futures the act of remembering creates.

Drawing from a wide-range of subjects, Manuel’s practice combines his Haitian heritage and his formal arts education, which culminated in an MFA Degree from Goldsmiths, University of London. Learn more about him here.

Use Your Purchasing Power For Good This Black Friday