The Way She Looks

In Bell Hooks, 1992 essay collection Black Looks: Race and Representation, her first introduced her concept of the oppositional gaze. It is written that due to black people historically being punished simply for looking, this repressed act became a political one, an assertion of courage, rebellion and resistance.

Behind The Way She Looks

This idea speaks to the motivation behind The Way She Looks: A History of Female Gazes in African Portraiture is a photography exhibit that opened at the Ryerson Image Centre on September 11th, 2019 and will be on showcase up until December 15th, 2019. Although there is a significant history of female photographers across the African diaspora,  it is still an emerging field of research, and just like the name of this exhibition, it is multi-dimensional. The Way She Looks centralizes Black women’s perspectives, within the roles of both photographers and the photographed.

The Way She Looks also shows that even before the times of #BlackGirlMagic and social media’s ability to allow for the personal crafting and distribution of images promoting the strength, value, and beauty of black womanhood, prominent figures including Mallian photographers Malick Sidibé and Seydou Keïta powerfully communicated as the exhibition’s curator Sandrine Colard put it, “how the subjects view themselves, at the word, and how they want to be represented.”

By drawing inspiration from these pre-existing works in order to be a stepping stone for creations of their own, a collaborative effort between a group of six youth, artist facilitators Anique Jordan, Michele Pearson Clarke, and Ella Cooper, and The Ryerson Image Centre produced The Way She Looks: Youth Showcase.

Over the last 3 weeks, this group has worked closely together to learn about the principles of self-portraiture, the hard skills in lighting and composition, and the ethics of portrait photography. Regardless of the implicit, or explicit, exclusion or misrepresentation of Black women that has persisted within mass media, these youth were provided with the tools to skillfully and meaningly depict that those that look like themselves are worthy of being seen and on their own terms.

“I’m really grateful to have participated in this [program]. Getting to talk to and learn artists/photographers about their practice was incredible, especially in the sense that we learning how to think about ourselves as the author of our own images and representation. Big thanks to the Nia Centre for this opportunity!” 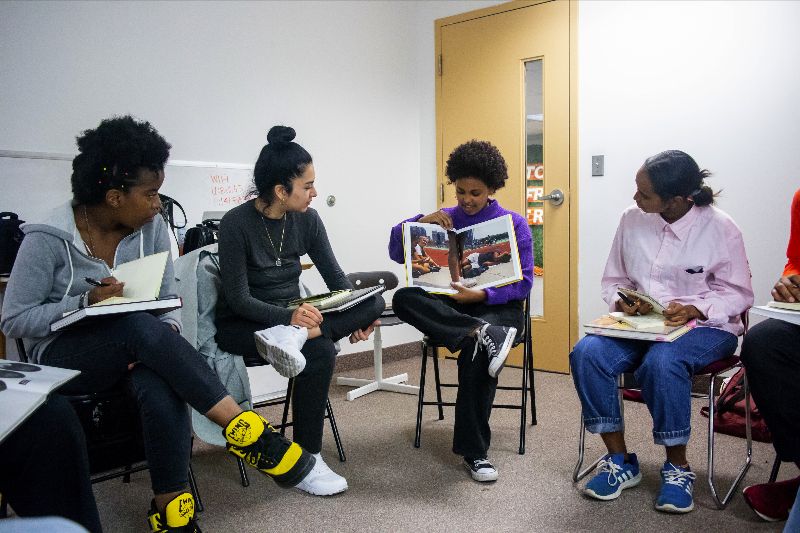 In a stark contrast to the way that Black women’s oppositional gaze was deterred because of the colonial practices of measuring, and documenting them as nothing more than “specimens”, propaganda material’s commodification of Black women’s bodies, our artist facilitators have provided these youth with insight on how to speak about one’s artwork from a place of bravery and honesty and showing that messages of empowerment can transcend verbal communication.

For Black women, the value of their existence, voices, opinions and actions, are among the things that contribute to their confidence, strength, and ultimately positive sense of self. Something that can be noticed as one recurring theme within the exhibition is a sense of bonding, community, sisterhood between those photographed. The relationships between these young creatives and our facilitators have continued this, and are very encouraging for the future.

The First of Its Kind: A Black Art Fair

In Conversation with Nicole Dennis-Benn